Swipe to switch between stories

A new Estonian Air Force radar post will be festively opened in Tõikamäe, Valgamaa, South East Estonia on Tuesday, which is an important part of Estonian and the NATO air surveillance system, LETA/Postimees Online reports. 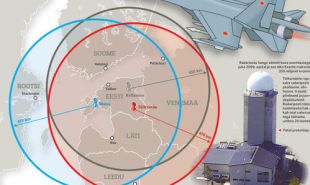 The Tõikamäe radar, together with the radar opened in the Muhu Island last year, complements the Kellamäe radar in Lääne-Virumaa county, North West Estonia, that has operated for a while, and all three radars cover the whole of Estonia and the airspace surrounding Estonia with a single radar image, defence ministry spokesman reported.

Opening the two radar posts was one of the key developments of Estonia's long-term military defence development plan. Estonia acquired the Tõikamäe and Muhu radars in a joint procurement together with Finland from French company Thales-Raytheon Systems Company S.A.S. Estonia paid for the two air surveillance radars 22.4 million euros, i.e. the price of one radar is approximately 11.2 million euros.

The radar post will be opened by defence Minister Sven Mikser, representatives of the Defence Forces, the Finnish Ministry of Defence and the manufacturer.